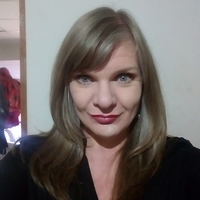 The Vilcabamba region was a pivotal location at the tail end of the Inca Empire. It was here that the last remnants of the Inca Empire fled to, after a series of battles against the Spanish conquistadors, forming the new capital of the Neo-Inca State in 1539. The Inca emperor, Manco Inca, took his people to this remote location, where the Incas hoped to hold out against the unceasing hostility of the Spanish, to preserve their knowledge, their culture, their freedom and their lives. In 1572, however, the Spanish made a final raid on the Inca’s remote jungle capital, which by then was a city of four hundred houses. The Incas were defeated, and their Empire fell soon after.

It is this story of survival and battle that goes with us on our extended eight-day trek along the route to and through Vilcabamba and then on to Machu Picchu. For anyone interested in the history of the Incas, this trek is hard to beat. It’s also a spectacular route in terms of scenery, passing through high tropical forests and between snow-capped mountain peaks. The route is also far less traveled than the Inca Trail and other alternative treks, making it ideal for anyone who really wants to get off the beaten track and to experience a far-flung adventure in the footsteps of the last Incas, where few have gone before. Why don’t you try off season? March, April, September and October are particularly good months, either side of high season, the weather is still decent and there are even fewer people!

Special features of our Vilcabamba Trek to Machu Picchu:

Type of Service:  some tours are small group service tours and other tours are private.

Accommodation:  4 star hotels at every destination that you will visit. These hotels had been carefully chosen and we can guarantee that you will feel comfortable and pampered.

Arrival to Cusco with a transfer to your hotel; a welcome meeting will be organized by your guide for a quick briefing of the tour. The rest of the day can be spent exploring Cusco, the ancient capital of the Inca Empire, set in the Andes Mountains. Discover Spanish churches and mansions that sit alongside Inca remains, visit the local market of San Pedro and their array of products from handicrafts to vegetable products, fresh juices and items for traditional Andean ceremonies. ... 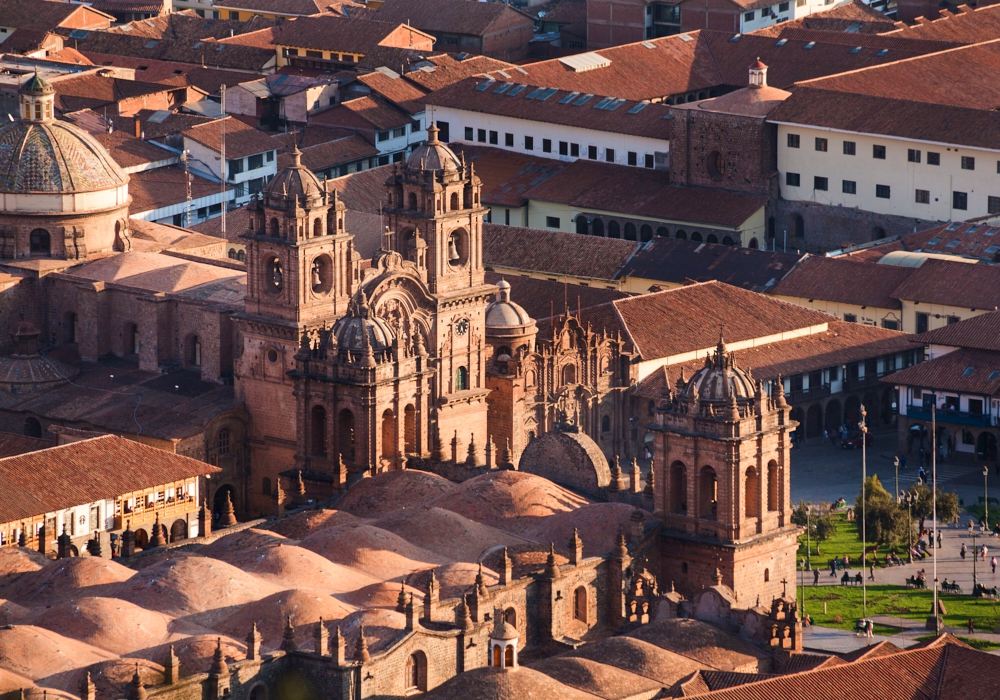 After breakfast, enjoy a free day to explore Cusco at your ease. The capital city of the Inca Empire is now the undisputed archaeological capital of the Americas, as well as the continent’s oldest continuously inhabited city. You may visit the local archaeological sites of Saqsaywaman, Tambomachay and Qenqo or you can take part in a Peruvian cooking class or chocolate making class, depending on how you want to spend your free day. We can help arrange and suggest all activities a... 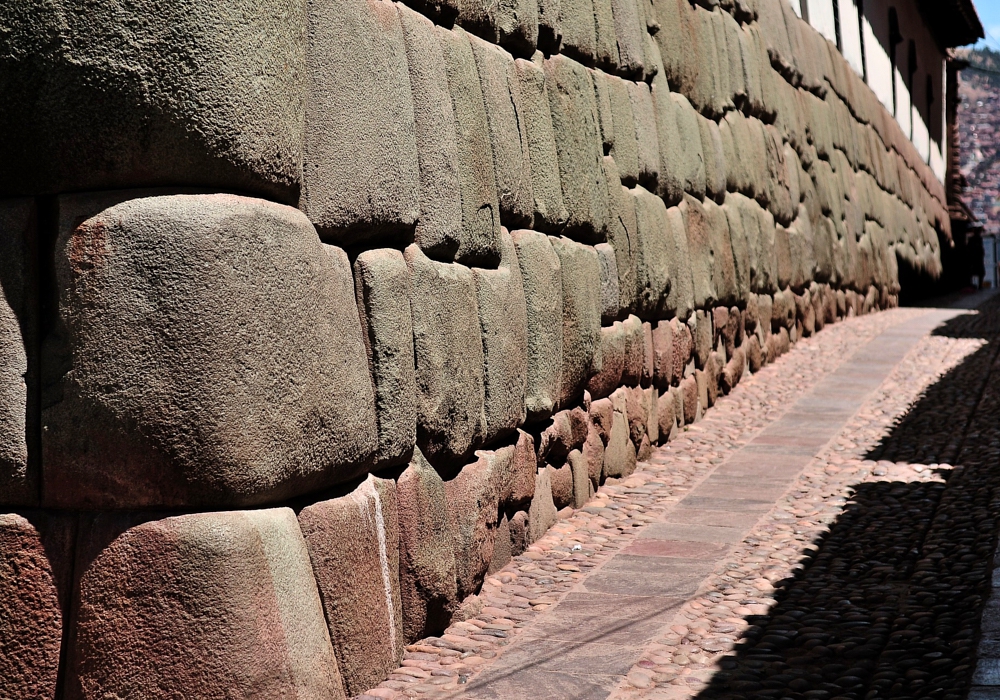 From your hotel, we’ll head to the famous Sacred Valley of the Incas. Our first stop is Pisac, founded during Colonial times; you will be able to appreciate the mixture of tradition. Here you will have the opportunity to test your bartering skills, interact with the local craftsmen and purchase hand-made souvenirs.  After exploring the indigenous community and all it has to offer, we will head off to the Potato Park! Meet the local community, learn about the unique process ... 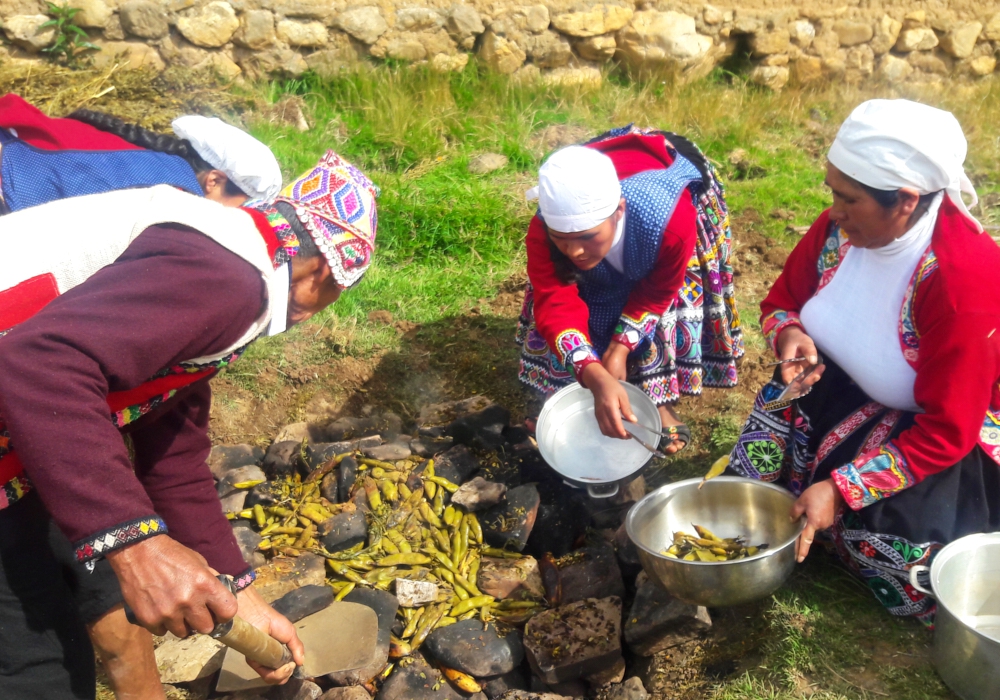 It will be an early start, as we have plenty of ground to cover before we reach the Vilcabamba region. We will take the road from the town of Ollantaytambo before rising up over a mountain pass called the Abra Málaga. We’ll then descend through the puna towards the high jungle and the Vilcabamba area.

We’ll head for the settlement of Santa María in the Vilcabamba Valley, where we can have a short rest before continuing on to Huancacalle. H... 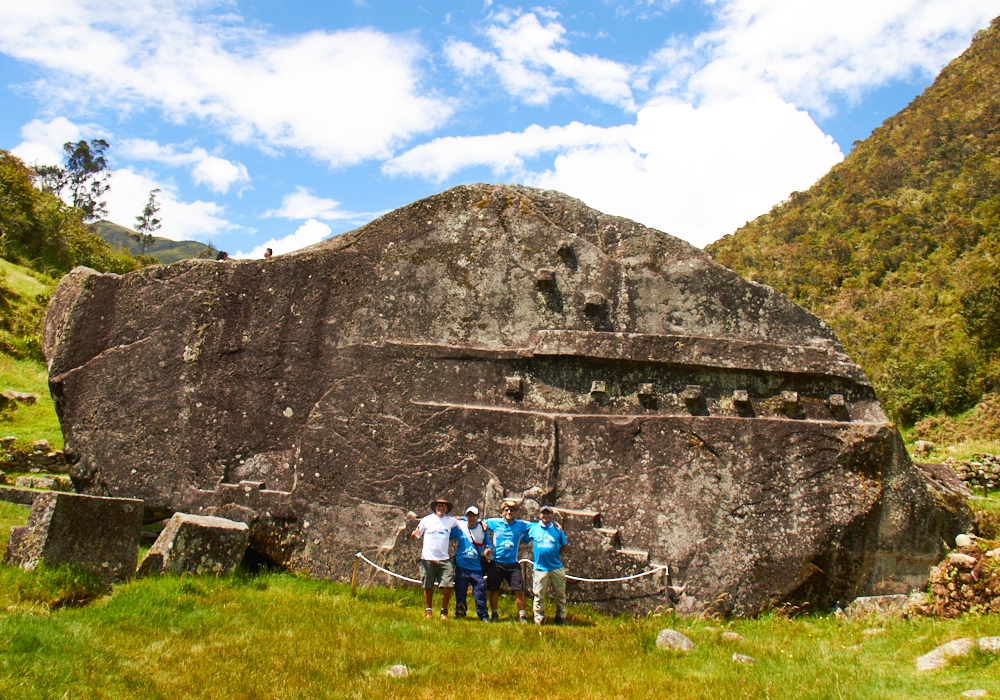 After an early breakfast we’ll head off along segments of an old Inca Trail, which we will follow through some magical landscapes. We’ll pass through different ecological zones: Quechua mountain valleys, cold and dry Suni and puna shrub lands. Among the diverse local flora, we’ll see plants used to dye textiles produced in the area.

We’ll have a short break and then continue our ascent to the Choquetacarpo Pass, which sits at about 4,600 m. ... 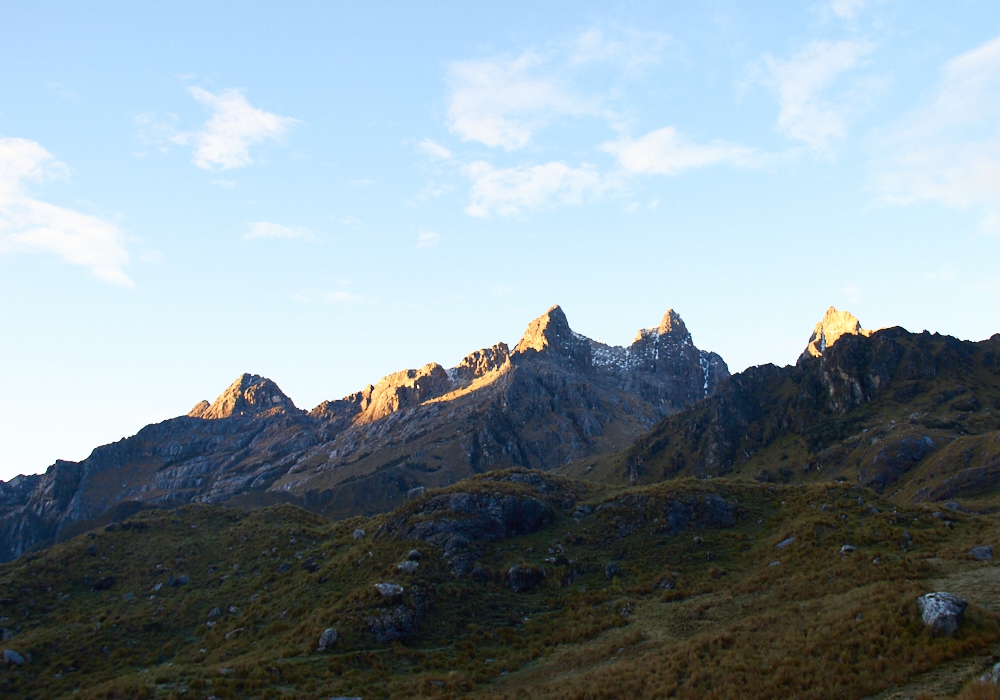 Today begins with an energizing breakfast, and then we continue our adventure by first visiting the Quellccamachay cave. Heading on, we will continue up and down through cloud forests at around 3,300 m (10,827 ft), finally arriving in the traditional village of Yanama, where we can get a glimpse of Andean life and experience its colourful customs. This is where we’ll have dinner and stay for the night. 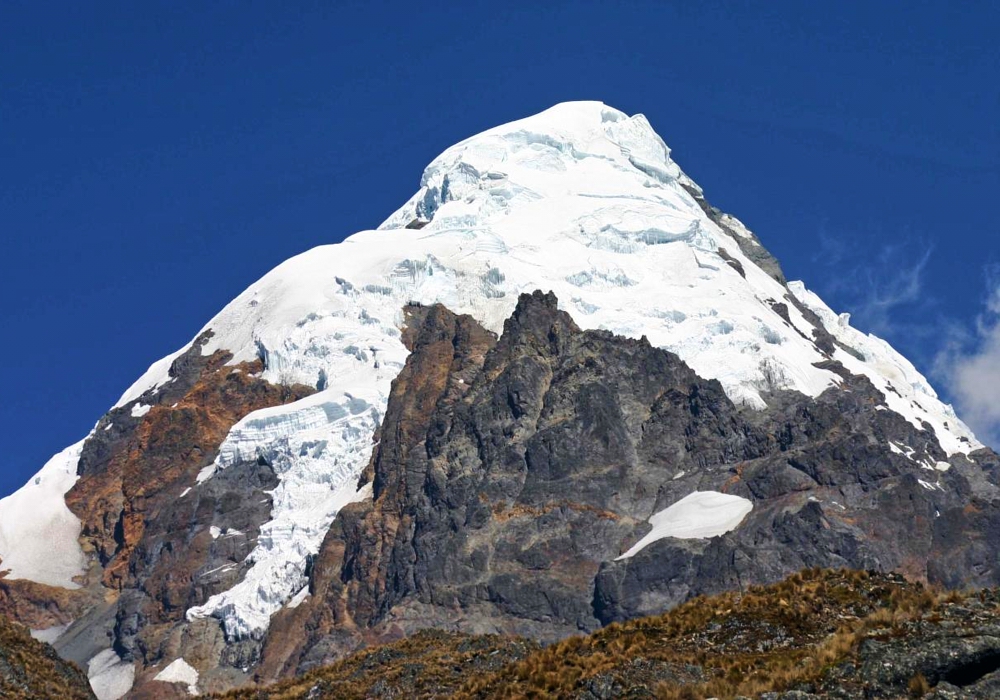 Today offers a break from trekking as we travel on horseback (although you can still walk some sections if you like). We’ll leave Yanama after breakfast and ride back out of the valley as we head up to the highest pass on the trek, at 4,840 m (15,879 ft). As we make our way to the pass, the scenery will shift from the lush valley to high puna, a region of rugged highland grasslands. Once we reach the pass, we’ll have fantastic views of the surrounding mountain ranges inclu... 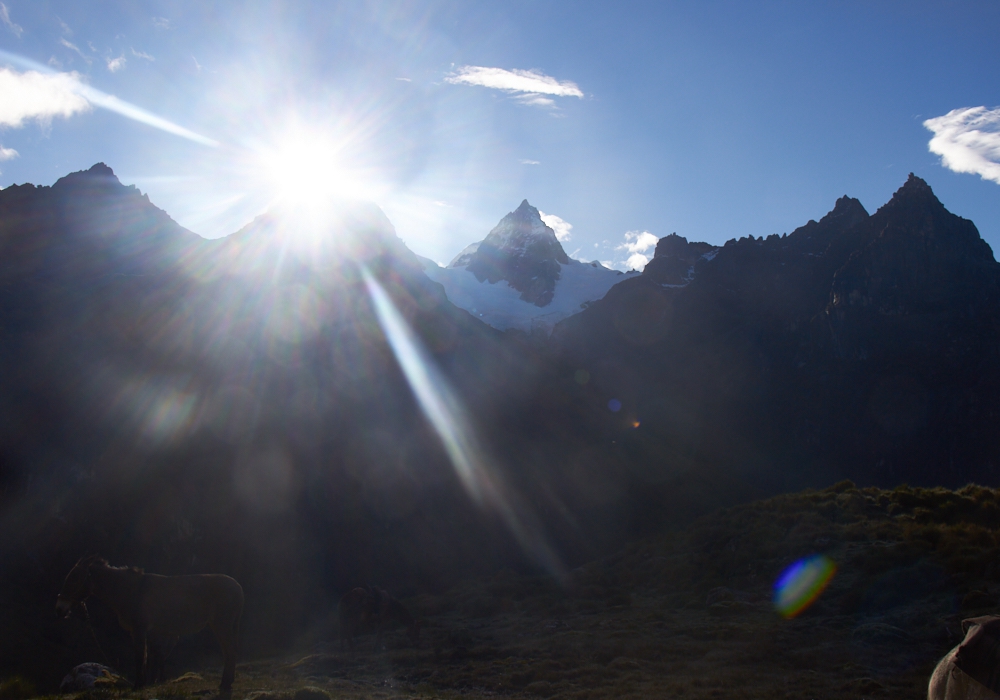 Today, much of our trekking takes us through a region of jungle known as the “ceja de selva” or the eyebrow of the jungle, that lies between the Andes and the Amazon rainforest. We’ll cross the Lluskamayo River and find ourselves in a world of waterfalls, tropical fruits and colorful birds. If we’re lucky, we might even see a cock of the rock, Peru’s national bird. The temperature will be much warmer here, and the various waterfalls and creeks provide ple... 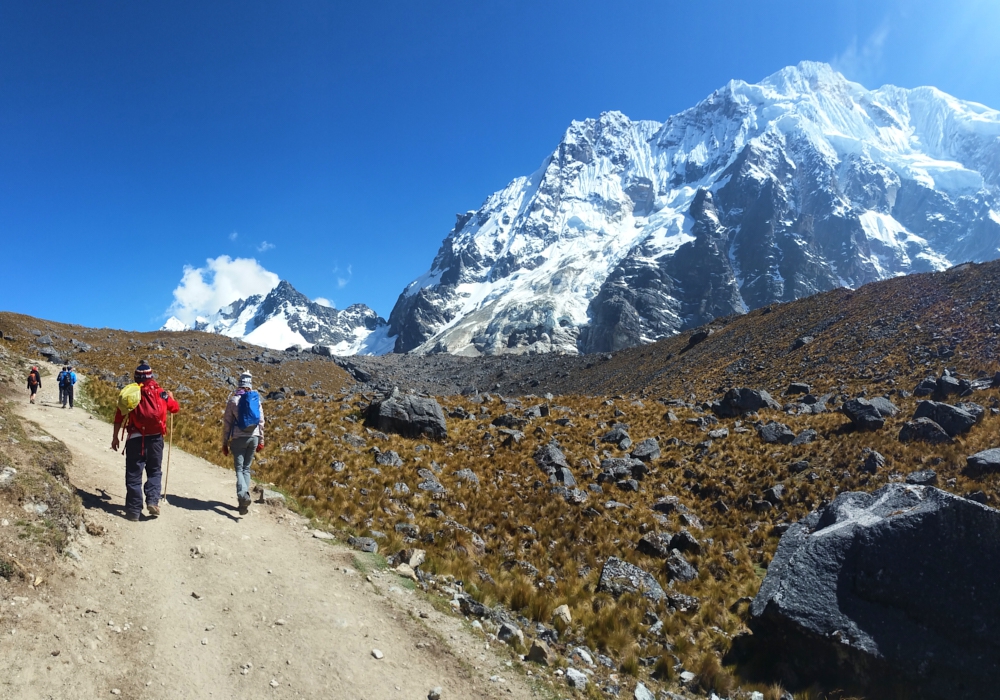 Today we head towards Llactapata. It will be a steady three-hour climb, passing through the coffee, banana and avocado plantations, and as we ascend, we’ll have wonderful views of the Santa Teresa Valley below us. Eventually, we’ll reach Llactapata, an impressive Inca ruin that may have served as an important resting place and roadside shrine on the journey to Machu Picchu, which it is connected to, via the Inca Trail. From here we get our very first glimpse of our final d... 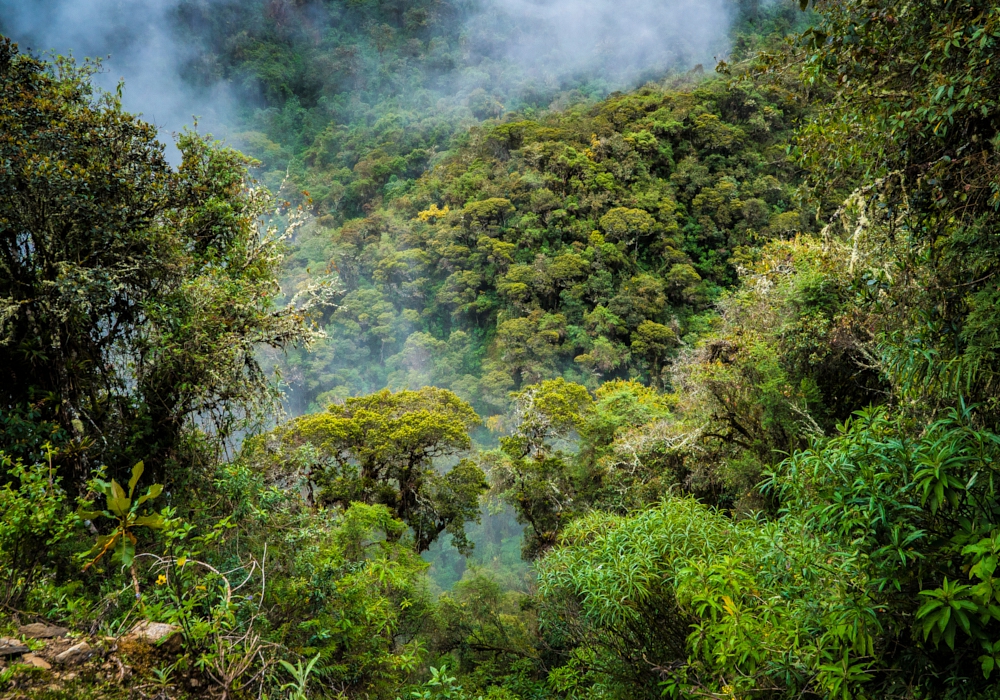 We’ll be covering lot of ground today, but the trekking is easy, especially now that we’re at a lower altitude. After breakfast, we will hike downhill for about two hours towards the Hidroelectrica (Hydroelectric Station), a well-known landmark along various routes to Machu Picchu. We’ll then continue for about 1.5 hours along an easy route to Mandor, where we’ll have a delicious lunch and spend the night at the wonderful Jardines de Mandor – Gea Lodge, w... 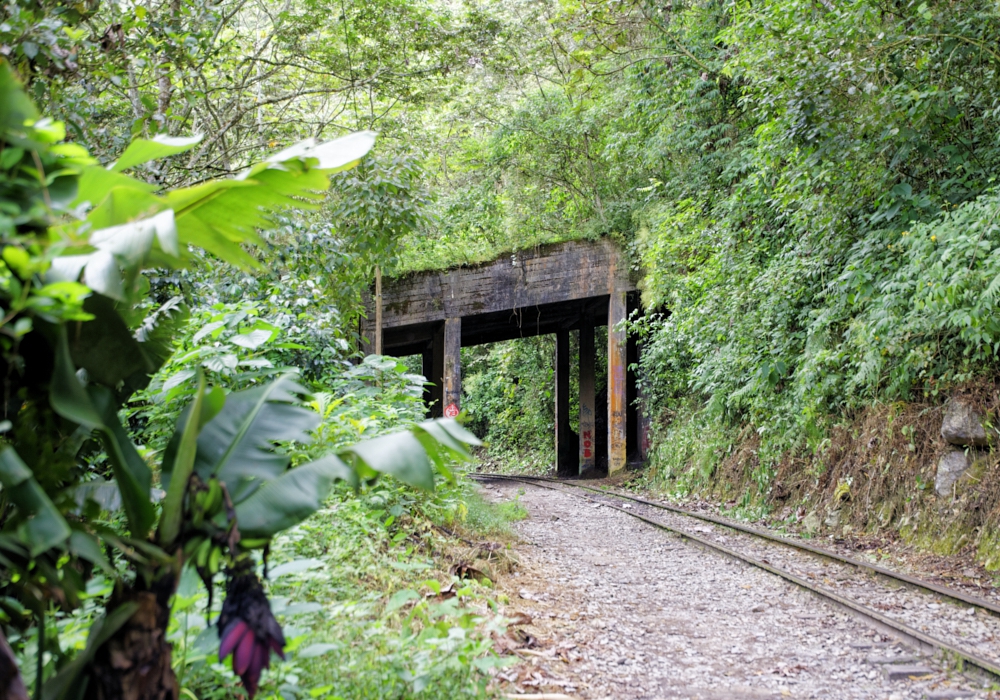 We will wake up early for breakfast and your guide will meet you at around 5:40 a.m. for the short walk to the gates of Machu Picchu. From here we can watch the sun rise over the famous Inca citadel.

We’ll then pass through the gates into the Machu Picchu archaeological site. Here you’ll begin your guided walking tour with an experienced and highly knowledgeable guide. Our tour of Machu Picchu will last about two hours, and will take you to all the mos... 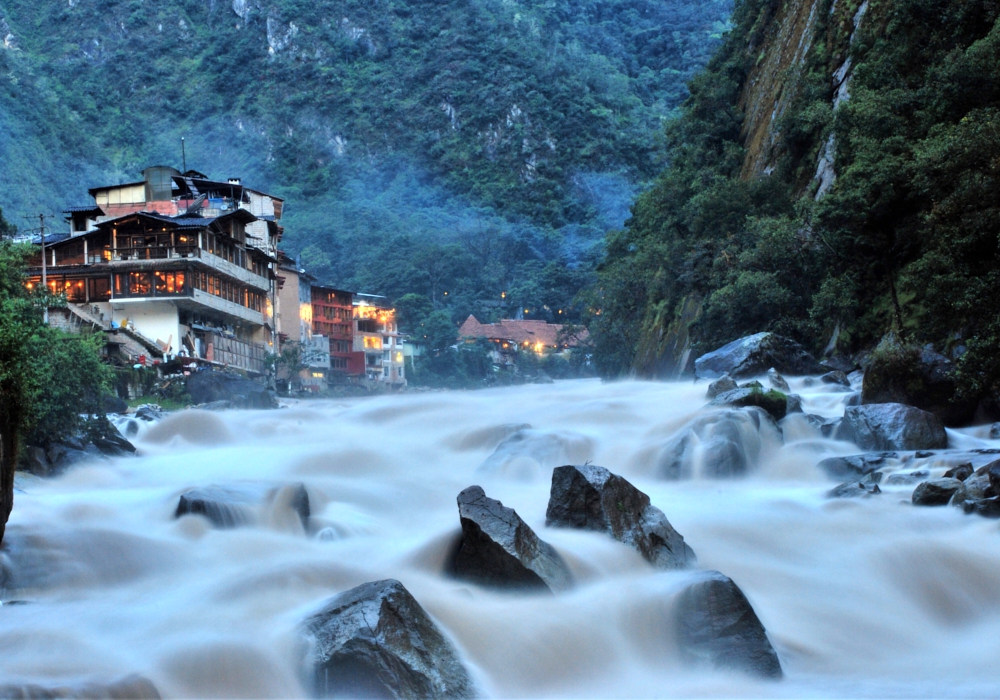 After breakfast enjoy your last day at leisure before transferring to the airport for your return flight home via Lima.

We´re flexible! Postpone your tour with zero cost up to 15 days prior to departure